What more could you ask for? A state-of-the-art pro stadium, great weather, The Territory friends meeting up, the mighty Florida State Seminoles first game, ranked vs unranked  - both with expectations, and the premier of a budding superstar…wait, what? Oh that was last year’s Week 1 at Pittsburgh. And lots of us TTers went to that too. This year was a little different. But not really. 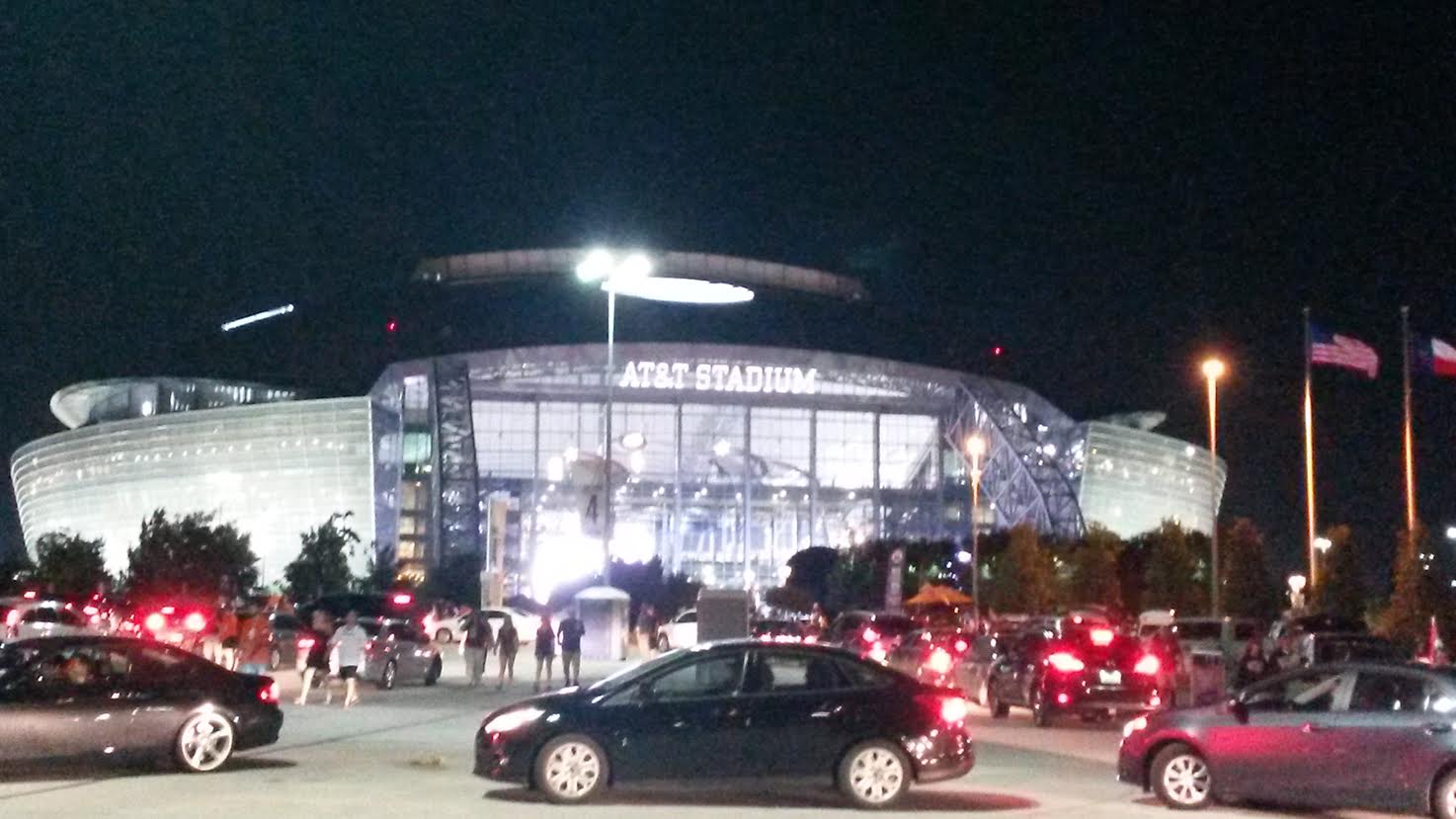 AT&T Stadium is a massive facility.

Welcome to Dallas, Texas! Or Fort Worth! Well, North Texas then. Full of culture, cows (nay, steaks), beer, wine, tequila, notoriously beautiful ladies, and home of some notable football, and a really big stadium. We do BIG well here in Texas.

And Jerry World is BIG. It’s an imposing, impressive structure.  The lid was closed because of the heat, but I wonder how different an experience it is when open? The place is ginormous inside. So tall. Says there are 4 levels, I counted at least 6. It felt like a state of the art giant basketball arena to me. But not in a negative way. A great venue none-the-less. Great vantage points, plenty of restaurant, beverage and bathroom choices.  And Texas sized prices too. And we Seminoles traveled well. Sold out the booster tailgates and had many impressive tailgates like ours. Announced attendance was 62,000 (seemed like more than that) with 100k possible. I estimated 60% were wearing shade of garnet and dijon.

Anyway, 6 hours before game time there was already a line at Lot 4 directly east of the stadium. 5 hours before kickoff 3 Seminole vehicles were among the first to stake their claim to a primly located position in eager anticipation of the serious tailgating about to commence. The weather reports were iffy, but turned out to be great – a little hot, but hey, it’s August in the desert, and its football season! 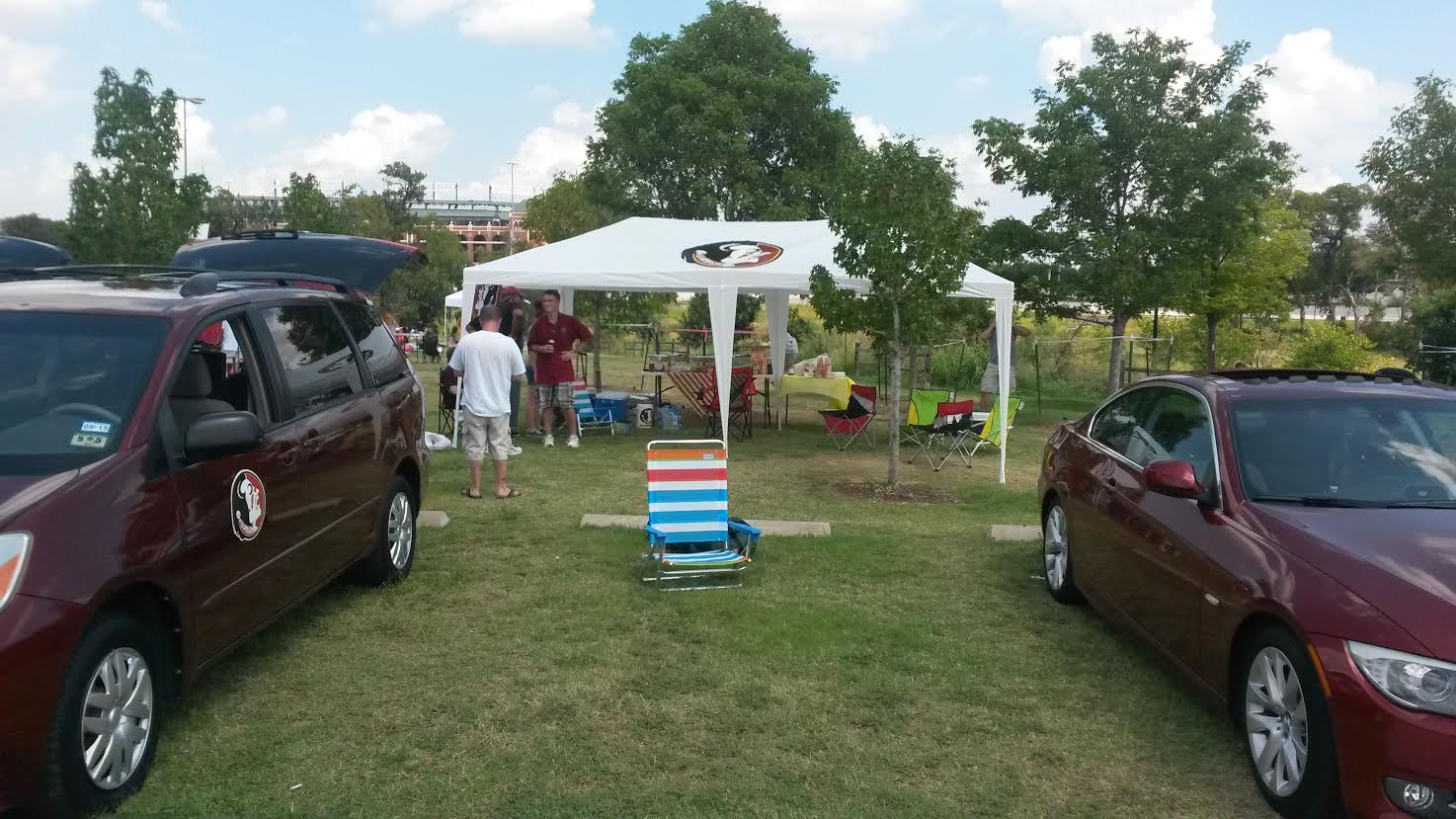 Getting ready to kickoff the 2014 Tailgate Season.

The party picked up steam during the bumper-to-bumper wait when we befriended about 8 current students, and a few nearby Oklahoma Staters. We set up shade, tables, marching chief music, tailgate golf, coolers, grills, and seating. In the end, we had 30 feet of tent protecting 50-60 loyal tailgaters. We had folks from Florida, Texas, California, Rhode Island, Arkansas, Virginia, New York, and many more. 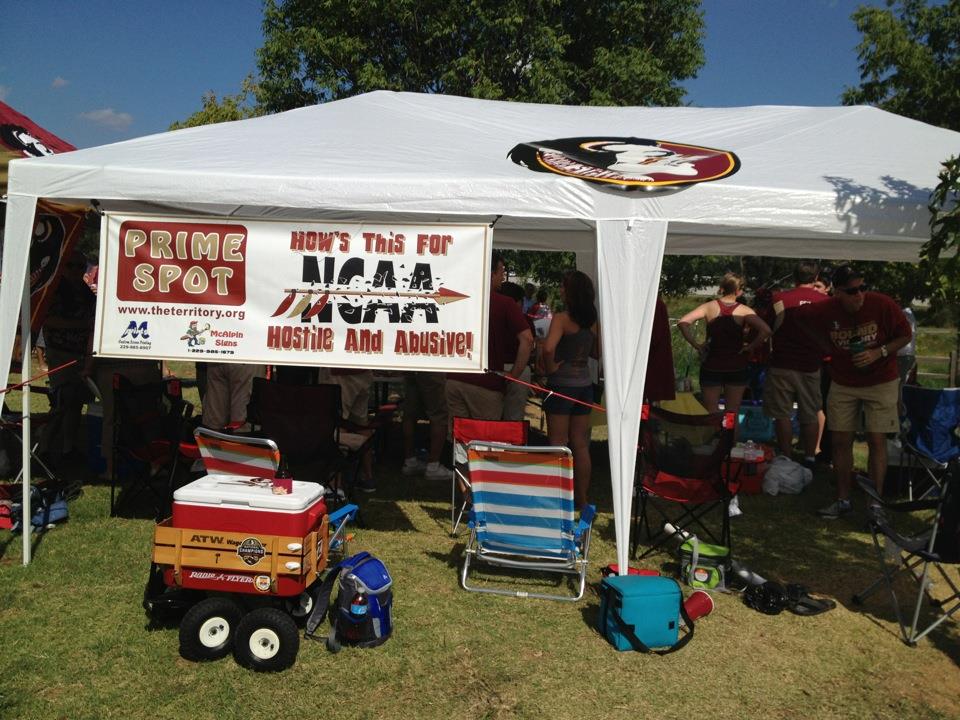 The Prime Spot banner made the trip.

And what would a Prime Spot be without “Prime” himself? Will made a surprise appearance (that’s 2 games in a row, if you’re counting. New streak? ;). We also had your hosts Mr Peanut, nole_in_tx, and an amazing cast of TT regulars;  Doc, docfsu85, Martyd, Seminole in Hawgland, Big Chunk, Jen, Little Chunk, TexasNole,  mn_nole, and I’m sure many others. 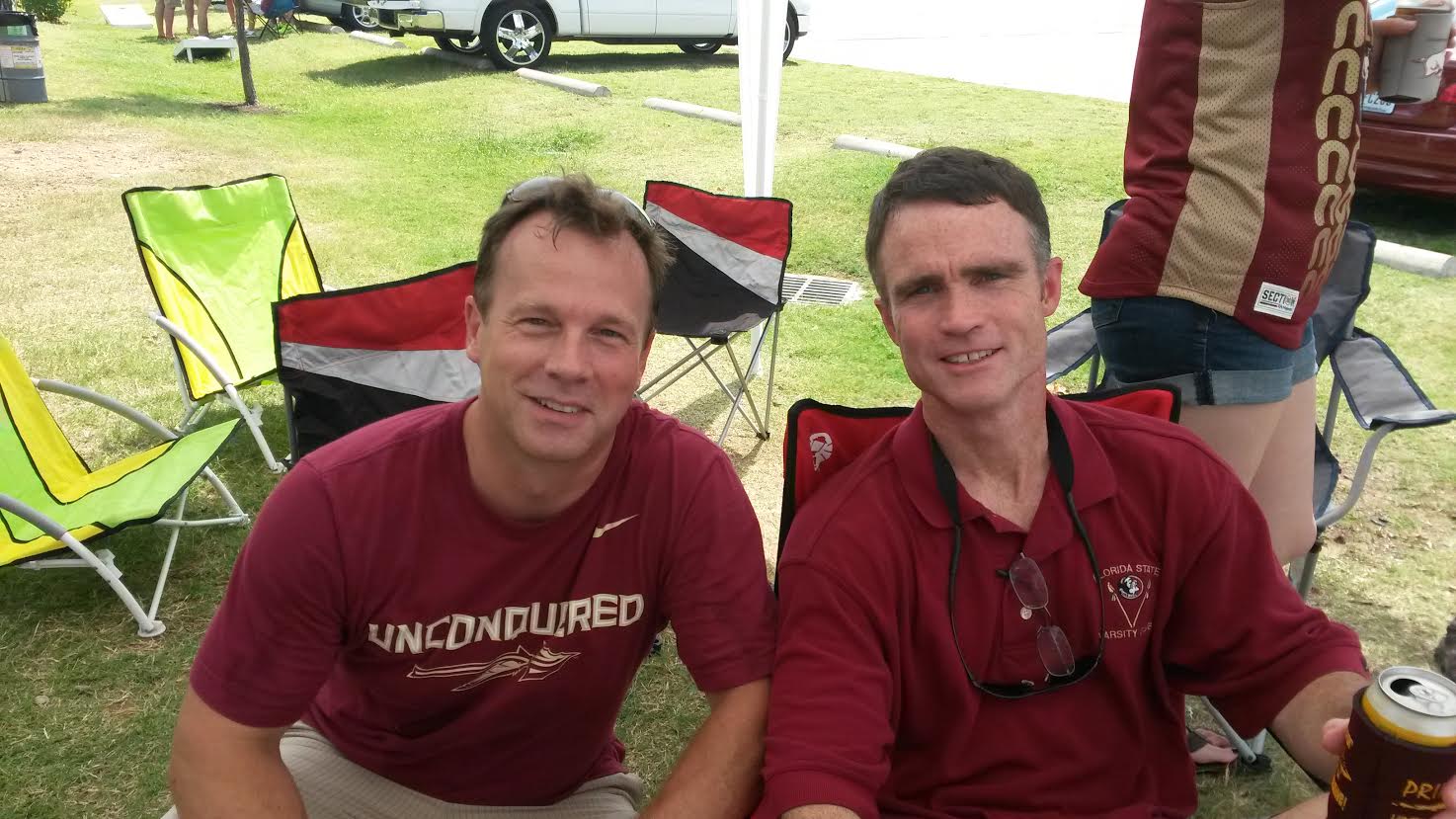 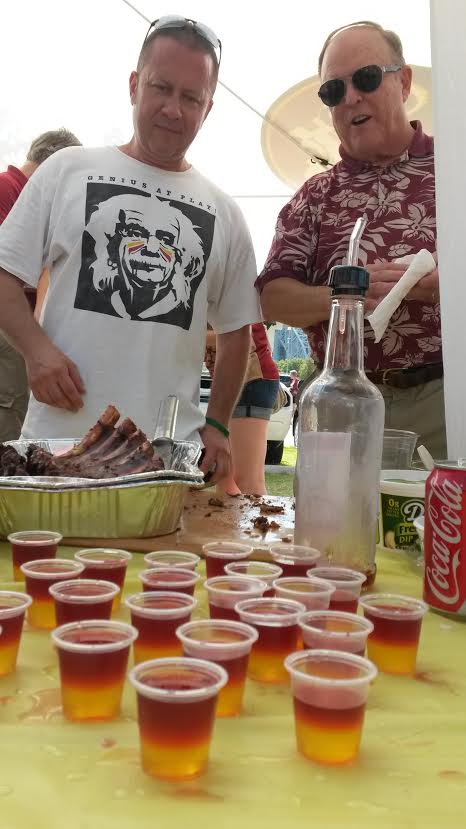 We also had friends from the LA Seminole club drop by, who totally took care of me last year during the Syracuse game and the BCS game. And will be attending the Prime Spot in Tally for Uf. As well as numerous high school and college friends. We had Okie Staters surrounding us too, but they did it right, brought full-on grills, games, LOUD country music, and a pretty welcoming attitude. And quiet a few well dressed co-eds I might add.

Our spread? We had BBQ chicken, Tandoori chicken, Duke’s special yogurt marinated chicken thighs, smoked ribs, bratwurst, coleslaw, brownies, cupcakes, cookies, beer, jameson shots, and war paint….ah the war paint, that glorious elixir that has eluded me until now, I toasted the whole crew with my first, and then hoisted a second for my friends that arrived a little late…and then a 3rd with Martyd – I think….or Doc… and then a 4th because, well, I don’t really remember much after that…. 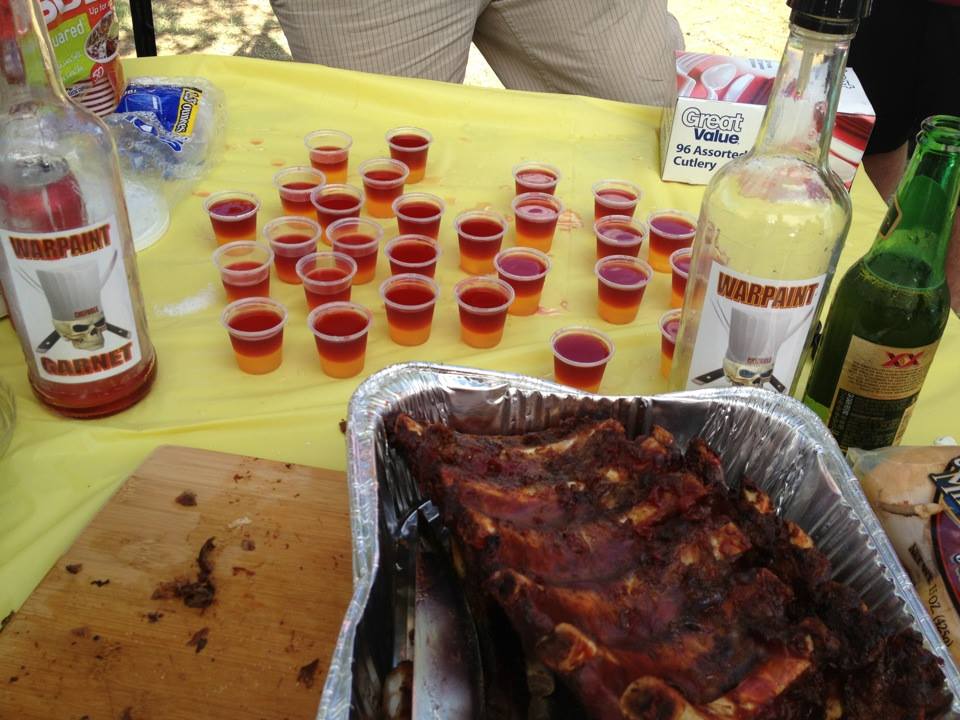 Warpaint and Meat. What more does a Prime Spot need?