I decided to take a step at the possible depth chart heading into spring. I feel much more comfortable about the offense side of the ball than I do the defensive side of the ball. The reason is two fold, first there seem to be more obvious transitions to new starters on the offensive side of the ball with the exception of a couple of offensive line positions. Secondly, the defense has become so multiple, it’s sometimes difficult to really establish a “starting” defense. The official depth chart lists like a 3-4, but in reality, it usually is more of a 4-2-5/3-3-5.

As spring roles around, much of this will be dependent on who is actually available. Reggie Northrup we know is out (and probably shouldn’t have been included on the two deep), but there could be others that have not been announced by the school yet. The other thing to keep in mind is that the depth chart heading into fall could be very different once a full allotment of players come in and depending on how well players play in the spring and progress in the summer.

Some of the key offensive battles to watch for:

QB – Sean Maguire certainly enters the spring as the penciled in starter. My guess is that continues into the season. JJ Cosentino certainly has all the physical size and tools, but there have been no indication thus far that he has a good enough grasp of the offense to take the lead. John Franklin has supreme athleticism, is lightning fast, and seems determined to make his impact in Tallahassee at the quarterback position. De’Andre Johnson will get the advantage of going through spring ball, too, but I don’t really think he’ll have much of an opportunity to compete for the starting job.

RT – I personally think 4 of the 5 offensive line positions are spoken for. Roderick Johnson certainly continues as the LT, Ryan Hoefeld will get the nod at Center, and based on Jimbo Fisher’s comments at the Signing Day party I think Kareem Are and Chad Mavety are odds on favorites to win the guard positions. That leaves the RT position up in the air. Wilson Bell was spoken very highly of during fall practice last year and I think he starts out on top. Derrick Kelly, another young guy that received positive reviews last season, and Brock Ruble are also names to watch in my mind.

Defensively, I think there are a lot more questions and combinations that could happen. There are grey areas in the front seven of what is a outside linebacker versus a defensive end. The back 4 (or 5) has so many interchangeable pieces with guys like Jalen Ramsey and Trey Marshall being so versatile. With that said, here are some of the interesting spots to watch this spring:

Jack – The outside linebacker/rush end hybrid position seems to be a great spot for Jacob Pugh, who was a linebacker out of high school but really showed some promise rushing the quarterback in spurts last season. Delvin Purifoy is another linebacker out of the 2014 signing class that has some good size and might find a home there. Depending on how the coaches slot different players, Lorenzo Featherston, Demarcus Walker, or even Matthew Thomas could be used here as well.

Star – The spot that Larmarcus Joyner excelled in so much in 2013 and Jalen Ramsey really started playing well at late in 2014 will be interesting to see this spring. With the losses of Ronald Darby and PJ Williams from last year’s team, I think Jalen Ramsey slides over to corner, but he very well could continue in that role. Trey Marshall is the guy I think could be perfectly suited here. A Lamarcus Joyner sort of clone, Marshall has great closing speed and seems to have the appropriate skills and instincts for this spot.

FS – After a nice impact season as a true freshman in 2013, I thought Nate Andrews was not as strong at FS last year for Florida State. Lamarcus Brutus, for the first several years on campus a mere afterthought, really had an increase in his playing time and played well enough with more consistency that I think he has an opportunity. The reason I really think this is a spot to watch is Derwin James. James was a consensus 5 star and the #1 rated safety in the nation coming out of high school and enrolled in January this year. He is physically mature and many think he can contribute right away and may be starting in the Seminole secondary immediately in 2015.

With all that said, here’s my take on the Spring Depth Chart for the Noles: 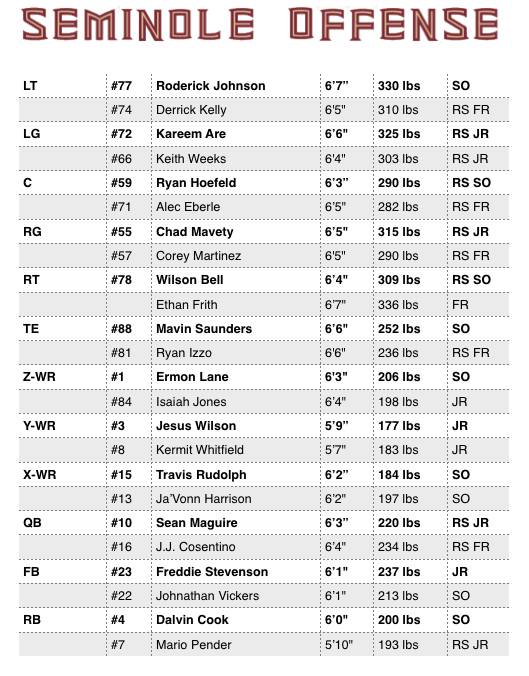