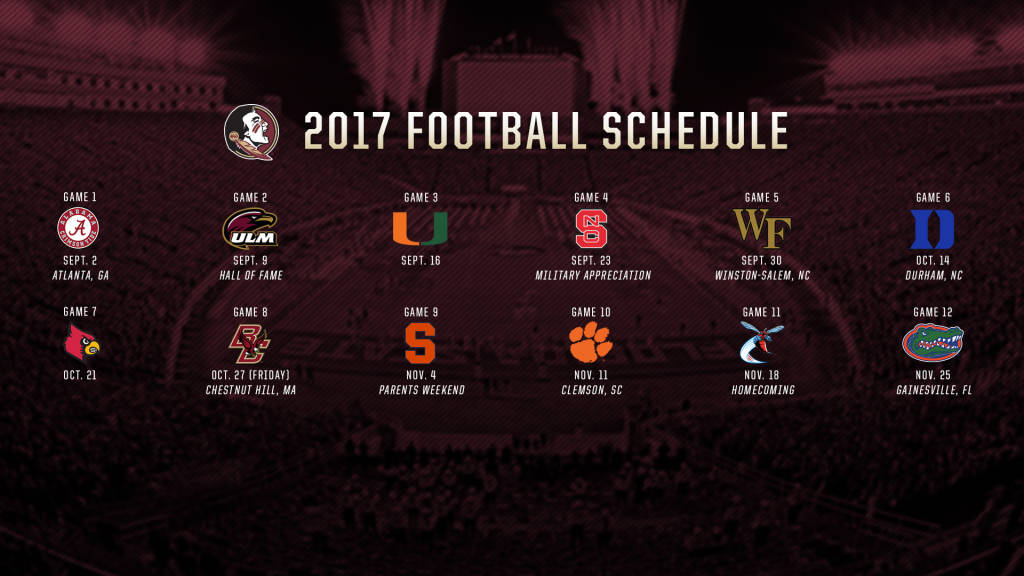 The 2017 football schedule for the Florida State Seminoles was released today and while the opponents had been known, the order of how opponents fall can sometimes have a big impact. I’ll look at the schedule from two vantage points, strictly from a competitive standpoint and from that of a fan attending the games.

From a competitive vantage point…

Obviously, starting off with the vaunted Crimson Tide of Alabama will everyone’s attention this offseason and is set to kickoff the college football season with, arguably, one of it’s biggest regular season games in quite some time.  Early projections have this being a Top 5 matchup and it could certainly be a precursor to the a possible playoff or championship matchup, regardless of who wins or loses.

Miami in game three with Louisiana Monroe sandwiched between is nice.  The Noles will have played an extremely competitive game already with the opportunity to work out kinks the second week of the season.  On the other side, Miami will be breaking in a new QB on the road in Doak with only games against two cupcakes leading up to it.  NC State on the heels of that matchup will be a bit of challenge, but NC State typically doesn’t give Florida State near the matchup in Tallahassee as it does in Raleigh.

The first half of the schedule rounds out with back-to-back trips to North Carolina to face Wake Forest and Duke with a bye week between. It is certainly a breather in the middle of the season, but I’m not real crazy about having the open week quite so early in the year prior to a lower level opponent.  The bye after Duke would have been nice.

The second half of the season kicks off with a tricky stretch.  The Noles and their fans will be frothing at the mouth for an opportunity to exact some revenge on Louisville. They should have plenty of time to get ready for that one with the aforementioned three weeks. The tricky part is heading up to Boston to face the fighting Addazios on a short week after what will probably be an emotional game against Louisville.  Then Syracuse comes to town in a winnable game prior to Clemson.

Closing out the ACC slate with Clemson is a nice move by the ACC in what could be a defect division championship game.  A game against Delaware State, which is really ridiculous, gives the Noles a week to hopefully focus on Florida and rest starters before closing out the season in Gainesville against the rival.

Overall, I like how this shakes out.  Start heavy with Bama, catch Miami early, a bit of lighter schedule in the middle, before closing out the back half pretty strong.  The spacing of the Noles toughest games is good with Bama, Miami, Louisville, Clemson, and Florida all separated by a couple of weeks.

From the viewpoint of a fan…

Oomph…yikes…ouch.  Not a lot of good to say.  The odd year home schedules are already usually lacking due to Florida and Clemson both falling on the road and the La-Monroe and Delaware State games aren’t going to pull big crowds.  The only thing going for those games is often times fans will try to make the season opener (yea, football is back) and the final home game (aww, the last opportunity to see football in Tallahassee).  Three straight home games in September after many fans will be making the trek to Atlanta for the Chick-Fil-A Kickoff Classic is a tall order, too. Here’s hoping those games are evening or night games as those September afternoon games are brutal for fans.

There’s basically a month between home games after that September stretch and with just one home game in October, the season will feel really choppy for fans. A November billing of Syracuse and Delaware State isn’t exactly going to fire fans up, either.